Having a Creative Gallery space in the Downtown Pomona Arts Colony is sometimes surreal. To the naked eye, the neighborhood is remembered more for it’s history than it’s present. But beneath the surface lies a vibrant community of artists that’s influence reaches far beyond even Los Angeles. Here are few of the people we call neighbors.

Reco Price, better known by his stage name Supernatural (aka Super Nat or MC Supernatural) is a gifted lyrical artist, best known for his “on-the-spot” freestyle and battle rap abilities. He has been a regular performer and host of the Rock the Bells Music Festival since its beginning in 2004. He recently began painting and we have been talks for an upcoming art show in the LOFT.

Pro, a talented renaissance man, is the manager at IE Photo Rentals. But when he’s not at the shop, he is also a Real Estate Investor, producer, web designer, and a talented writer/musician. Watch his music video.

Thomas Pathé is an artist. His paintings strike an electric balance between the technological and the sublime. He is known for his color work and is intended to be both strong and seductive, communicating on a gut level with the observer. Layers of paint and varnish unite with their sculpted surfaces to present color as a physical experience.

Ken Barrientos aka KenBts. is a producer/engineer/sound-designer who’s local loft/recording studio is nothing short of astounding. Full of analog synthesizers, an organ, upright piano, a vintage Moog, and obscure recording devices. He’s a gifted musician who’s known for creating a landscape of mood heightening beats.

For over two decades, Gabe Real has prevailed as one of Southern California’s top DJ’s. Gabe has rocked countless dance floors with every kind of music possible, focusing on Reggae, Funk, Old School, and Hip Hop. With the experience of DJing at big concerts like Coachella, to small Dinner parties, he knows how to keep the vibe right, and the party going. Gabe also spent several years on College Radio, owned a Record Store, and now operates a Recording Studio in his loft.

Paul Nguyen is an amazing tattoo artist who also paints, sketches and and does wood burning. Working at the infamous Shamrock Social Club for years, his cliental began sending him world-wide to create everything from full body tattoos to small intricate pieces. He is also owner of the gallery, 11th Door Studio, hidden away in a Downtown Pomona alley. 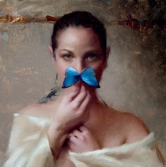 Joseph Todorovitch is a contemporary painter who looks to the past for clues about the future of painting.  His work is primarily figural and aims to create a visual field of atmosphere, space, and light, occasionally evoking subtle narratives within the viewers.  He’s working to create paintings that draw viewers in and hold them by providing technical interest that makes it difficult to stop investigating. His studio is located in the Downtown Pomona’s Progress Building and he holds small Figurative Painting Workshops throughout the year.

Raised and bred in Detroit, Michigan, Ta’Raach, takes his music seriously. Never compromising and always innovating, this veteran (a decade and some change in the game) is a triple threat with lyrics, beats and vocals. Ta’Raach has worked with a host of notables inside and out of Motor City between Dwele to J Dilla, Carl Craig to Elzhi (of Slum Village), Waajeed to Amp Fiddler. Nowadays, in between showcasing his talent behind the decks, making beats and dropping lyrics for the likes of Platinum Pied Pipers, Dabrye, As One (Kirk Degiorgio), and Exile. He lives and creates in the Progress building in Downtown Pomona.

Trellis Evans (AKA Travis), is a fashion photographer and owner of EvansEyePhotography. Working with agency models, he is quickly becoming an emerging light in the fashion and editorial photography scene. Complete with a cyclorama seamless cove wall, his studio, located across the street from the LOFT, is always full of models, eager to be shot by Trellis.

Andrew Manley, photographer and owner of IE Photo Rentals and Wanderwall (across the street form the LOFT), is a extraordinary entrepreneur. You’ll see him buffing out one of his cars (Honda s2000, Acura NSX, Porsche 964) on sunny days in front of the shop. He’s the guy to ask if you want to want to get the down low on new photography hardware or learn new shooting techniques.

Maria Ongpauco is the owner of Vintage Renewals shop and gallery. Coming from FIDM, she has a unique sense of style and design. She crafts her unique clothing and accessories from reclaimed fabrics and blends them with vintage fashion from the 80s and 90s. Check out her loft during the next Art Walk.

Antonio Mejia is the owner of Smoking Mirrors gallery (next door to the LOFT), resident tattoo artist at famed Good Time Charlie’s Tattooland and gifted painter. Featured in Eric Schwartz’s recent film Tattoo Nation, Antonio has played a major part in tattoo culture. Known for his hand drawn Chicano-style tattooing, Antonio’s flow of work has sparked interest in many artists and collectors worldwide.

Mia Karter is a conquering real estate agent and an amazing vocalist. Known recently for her Amy Winehouse tribute show, her and her band (Mia Karter and the Hits) takes charge of the stage. She is a multifaceted entertainer artist with extensive film, television and voiceover credits. Returning to the studio, she has collaborated with an array of incredible producers and musicians for a new project, “Poison”. It’s a hip-hop/pop/jazz hybrid, with the debut single “Sweet Poison” dropping this year.

There are so many more amazing creatives in our neighborhood. We thought we would share just a few. Take the time to look past the old buildings, vacant lots, and nightclubs and you will find an active Arts Colony that is sure to leave you breathless.

Brand Storyteller, Arts Advocate, and Cultural Visionary with over twenty years working with innovators, thought leaders, community organizers, clarifying their vision and developing specific strategies to forward their goals as a creative problem solver. View all posts by swodeck