George Pulido was born in Los Angeles and raised in the San Gabriel Valley. George first expressed himself through skateboarding and poetry. At the age of 18 it was with a paintbrush and the encouragement of his best friend, Damon Shindler, that George found his motivation to avoid the pitfalls of his surroundings and set his sights on higher goals.
Before long, he found an audience that was drawn to his work as an artist, and the interest of local collectors/investors allowed him to earn a living on his paintings. With the growing attention of art investors, he began to make a name for himself in the art community throughout the Los Angeles area.

As a newly established local artist, George then made the decision to tour parts of Europe—where he was inspired by the environment, architecture, and cultural vibrancy and incorporated it into his paintings. For months George worked closely with art collectors in Spain who were intrigued by his work. 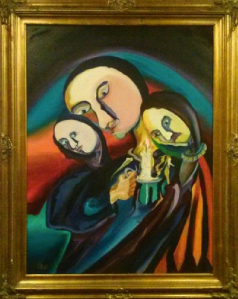 Today, George prides himself in doing freelance work centered in Southern California. His art can be seen, and has been featured, in various galleries and group showings locally. George’s paintings have also appeared in a number of Hollywood’s popular TV series including “Law and Order” and “Saving Grace” as well as films such as “Yes Man”. In his spare time, George has also given lectures at local colleges that motivate young, aspiring artists to challenge their imagination to reach new heights and explore their own means of self expression.

George is currently a featured artist in his local community, where he has his own gallery open to the public.

“We all possess unique talents granted to us from above. My art is a gift from God, and I want nothing more than to share that gift with you.” –George Pulido